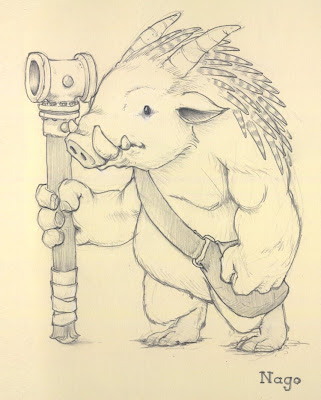 Glix gets his summons on the Road 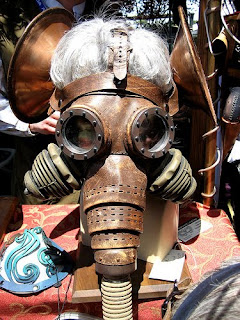 Glix opened his summons from the Town Council. He figured it was orders for the next scouting mission. He was wrong. Torker Wylls smiled as they slowly rode back to the Village. He knew what it was for. Glix wondered if this was his summons to the Water Rite. He would find out tomorrow...
Posted by Lead Addict at 5:11 PM No comments:

Akkad takes the summons and BAMF... 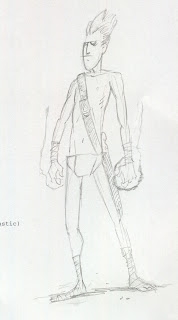 Akkad was angry. This wasn't unusual, but more so today. He'd been working
on weapons for the Watch for what seemed like forever. He was tired, filthyand it took everything he had not to set the messenger on fire that broughtthe summons.What did those idiots want now? He fixed the hinges on the North Gate days ago.

He worked to the last second, and in a burst of light teleported to the hall.
Posted by Lead Addict at 5:04 PM No comments:

Akkad and Nago are Summoned

Akkad (the blacksmith apprentice) and Nago(the blunt weaponsmith apprentice) have been summoned to the Tower Courtyard at noon tomorrow. Their summons is sudden, but it may be time for them to both participate in the Water Rite.
Posted by Lead Addict at 4:49 PM No comments:

Nago, Takes the Summons and Prepares Himself 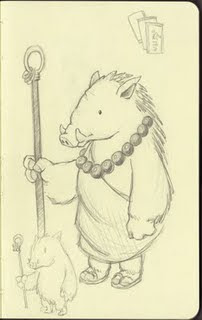 Nago had a suspicion that his summons had something to do with an extended watch at the city walls. Nothing dramatic, surely nothing to get overly concerned about. It may even be something as mundane as digging a better ditch from the stream to the fields. That would make sense, he has a strong back that would be good for digging and lifting. But then again, he was a bit curious about needing to “put his affairs in order”.

What did they mean by that exactly?

Maybe they were planning a patrol that would go a bit further than usual.

Maybe they were planning on exploring the ruins of the Ancients City.

Nago did his best to put those thoughts out of his mind. He decided to simply do as the summons said and take care of the little things, the lose ends, putting his affairs in order as it were. He continued his work through the afternoon and cleaned up his workspace as he always had (despite what many may think of “pigs” he was quite obsessed with keeping himself and his surrounding orderly and clean).

As he left the shop he made sure to pay back Frelk for the lunch he had spotted the day before. Walking home he realized that he really didn’t have many affairs to put in order. He never found himself to be a collector things, at least not of things that have no use. So there wasn’t much worry clouding his mind. It seemed to Nago that the most worrisome folks had lots of “things”.

That evening Nago packed what amounted to be most of his worldly possessions. He had a canvas bag that normally carried his lunch. A small tin that contained a sliver of steel and flint wrapped carefully in a length of buckskin. A few short candles. A small folding knife that he was particularly fond of (he never cared for sharp things and always thought it was a brilliant idea to fold a knife over on itself. Smart and safe). He also packed his carved wooden ocarina. It’s larger than most but his fingers are such that they would prove too clumsy otherwise. He made sure to throw his drinking cord in with the rest reminding himself to be sure and fill it at the well in the morning. Rolling up the last bit of bread and cheese he had in a scrap of linen he decided that he should drop his tool box off at the shop on the way to the courtyard. They would only sit at home while Frelk could make good use of them at work.

Setting his bag next to his great hammer (a thick handled, two handed mace that also served as a walking stick) he thought it best to turn in for the evening. He wanted to be well rested and prepared for the day. Before drifting off he worried a bit about being ready and arriving on time. Punctuality and preparedness were as important to Nago as cleanliness and organization. Thinking on these things always gave him restless nights before big events.

But he would be on time, he always was.
Posted by Lead Addict at 4:43 PM 3 comments: 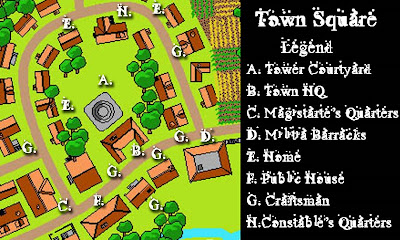 Tower Courtyard is the Town Square of Line Acres. The Central part of the courtyard is dominated by a rasied plinth of stone, five steps high. Sitting on the plinth is a large wooden water tower, banded together with heavy metal straps. This is the fresh water source for The Acres. It sits over a sunken well, dug years ago by the founders of the post Dying Years resettlers of The Acres. The well goes dry occassionally in the summer season if the rains do not come. It is then that the community uses the stream and pond for fresh water.

Adjacent to the square is the Town HQ, where the Council meets, private homes, craftsmen's shops, the Town Militia Barracks, The Town Magisters quarters, and the Constables quarters. It is also where the Militia training is held.

The Town square is the community center of The Acres.
Posted by Lead Addict at 8:26 AM No comments: 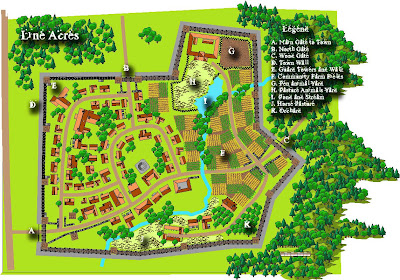 You have all grown up in Line Acres. A prosperous small walled community adjacent to the Black Wood, just off the North Road to Fall Bridge, just north of the Explorer’s Guild village of OutTown. And north of Renders Point.

Line Acres, so called because of the ancient signs etched in stone in the walls at the town gates, is a roughly 90 acre sprawling village in a former enclave of the ancients, long stripped of useful items and artifacts. It is surrounded by an 8 foot concrete wall faced with a few places of crumbling brick, but otherwise fully intact. The Town has 3 major gateways where the walls are separated, where ancient roads once were. The town grows crops and herds animals inside the protection of the walls. There are approximately 300 people living in Line Acres. There are many trades people (blacksmiths, weaponsmiths, leather workers) to supply the basics of life, even a teacher that teaches reading and writing and numbers for Trade Speak, but most farm or raise herd animals.

The Acres (as it is known by the residents who have no idea what an acre is) has a mandatory militia for all residents, a constable and a few deputies, and the scouts. The Militia is in charge of manning the gates town, putting down intruders, and walking their turns on the wall ( a system of walks and lookout towers has been constructed along the wall). The constable enforces the Law of the People ( a document written by the original post inhabitants of The Acres). And the Scouts were formed to scout the regions around the Acres to find and potentially deal with potential threats to the Acres, including forays into the Black Wood and the See of Grass, looking for resources, or looting available resources or artifacts of the ancients.

The community is a mixed community of pure strain humans, humanoids, and mutant animals. And live mostly peacefully with each other and for the mutual benefit of each others survival. The village is prosperous, because of its tradesman base, and is relatively safe, given its isolationist attitudes and close-knit community based way of living. Most trading is done out of town , and the basic goods made in The Acres are quite sought after. This out of town trading also helps prevent bad things happening in the village since non-member folks are never allowed in to the village, except on rare occasions, even refugees.

This attitude has also created a general dislike for all people from the Acres in the surrounding communities, since they take the brunt of the refugees and raiders that get frustrated trying to break into The Acres and leave and take it out on the surrounding villages.
Posted by Lead Addict at 12:52 PM No comments:

Life in Lincoln County had always been rough. You have to be on the alert at all times. The county marks line where the western See of Grass ends at the heavily wooded Rocky Foothills and then goes east and south to the Great River Valley. And although nature had given the county abundance, it also was a crossroads of mutants, wasteland gangers, sand walkers, wild plants and animals. And they all want to take something from the good folks just trying to eek out a life on this frontier. It was poor and wild, and the villages and towns huddled together in their squalor for mutual protection. People ranch and farm in together, in guarded fields. Others hunt and gather what they can.

To the North lays the Independent Duchy of The Devine Light. To the East lay the Ruins of Springfield, To the South lay the wastelands, and to the West, out in the See of Grass, the massive ruin of the Ancients City on the Great River. 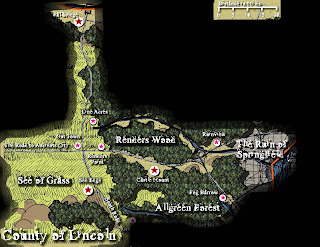 Posted by Lead Addict at 9:35 AM No comments:

The ruin of the Ancients surrounds us. Haunts us. Infuses us. We live far away from the ancient cities of metal and grey stone that stick up from the land like angry, rotten teeth. We live our lives, try to survive, but they are always there in the distance. Silent sentinels beckoning.

Somedays the wastes that surround the homes of the ancients erupt with acrid flame. Angry. Beacons of decay and filth.

But what secrets may lie in them? Certainly death. But a few tales of fantasical creatures and powerful artifacts that rival the gods are whispered to be there too...
Posted by Lead Addict at 9:07 AM No comments:

Newer Posts Home
Subscribe to: Posts (Atom)
(All graphics, mapping, sketches, paintings, text and ideas copyright of the artist, and shall not be used without their written consent)